"Middle School in the Waldorf School,” an initiative group of the Pedagogical Section and the International Forum for Waldorf/ Steiner Education, has been working together for two years. The aim of the group is to explore current approaches to the development and methodology of the Middle School.

Reflections on school and teaching-

Already in the first round of the online conversation about the pedagogical experiences during the lock-down, the word “reconsideration” appears several times: "I have to rethink my work in school now.”

At first there is the question of online teaching: In an 8th grade, the planned theatrical play cannot be carried out because of health regulations. Now it's time to "rethink,” and a biology block given with online introductions and tasks follows instead. Soon it becomes apparent that the pupils deal with the given weekly schedules very differently. Without the stimulating community situation in the classroom, for some pupils it is the helping parents who develop ways and rhythms of work with their children. On the one hand, where several subjects are taught online, it is important to absorb and move a wealth of intellectual content. On the other hand, many pupils describe a growing longing for the class community after becoming used to the new “everything-is-different” beginning.

The experience on the part of pupils, teachers and parents was unanimous: In an exchange with longer online screen lessons, with their emphasis on the head-related quality of the mental content, it leads to clear signs of fatigue. The experience was confirmed that especially in e-learning there is a high risk of fragmentation or isolation of the topics due to the variety of the specialized content in a subject area. As a consequence, the re-awakening to the importance of the holistic context was described as an impulse for new reflection: How can we connect the alternating references (of personal experience vs. electronically delivered content) which arise in individual lessons? And how can cross-curricular interrelationships strengthen learning via networks and immediate sense-based references?

The experience of many parents encouraged further reflection: Especially the younger school children were visibly benefited by the unexpected peace and quiet of longer, "non-clocked" times of day and week. Now there was a different quality of time which was present, in which free, imaginative activities and thus an inner balance of the soul forces could revive more strongly. Could the school of the post-Corona time focus more on the organic, holistic and the essential instead of on the many facts and details?

Even where the accustomed rhythm of everyday school life changed for the teachers to new forms of cooperation and to different timetables, new, valuable perspectives were revealed: One teacher from Northern Europe, for example, described how she had come to know completely new sides of her colleagues and how she had become aware of the social interaction with each other in a new way. From this new reflection on the importance of collegial cooperation for the school, she is now developing the initiative to create other times and spaces for collegial encounters within the school.

In summary, matters for reflection relating to work and teaching in the school were described: 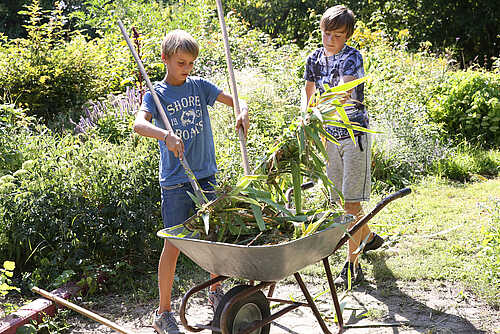